We have detected that JavaScript is disabled. Here are instructions on how to enable JavaScript in your web browser.
Skip to content Skip to main menu
Magazine
VOLVER A MAGAZINE
Barcelona ciutat

To live in a rental apartment in BeCorp · Barcelona – Sarrià is to meet the lifestyle of a town. The neighborhood of Sarrià still retains the spirit that excited the nineteenth-century Catalan bourgeoisie: small streets and squares that are built around Major Street, narrow sidewalks, pedestrian streets and neighbors who greet as they pass.

Sarrià, due to the influence of the middle-class and bourgeois who installed the summer houses, was one of the most prosperous areas of Barcelona. A splendor that manifests itself in the architectural field, with houses, many of them modernist, that can be seen in the old town, in the Mallofré passage or in the Sant Vicenç square.

The beauty of Sarrià is enjoyed in every store or restaurant in the neighborhood. Do you want to meet the ten most charming? Take note!

Orlandai House
Near the Plaza de Sarrià, we find Casa Orlandai, the current civic center of the district, a modernist jewel with interior decorations and stained glass windows that deserve a visit and even coffee on the interior terrace. A cooperative manages the coffee of Casa Orlandai and fair trade products can be purchased. 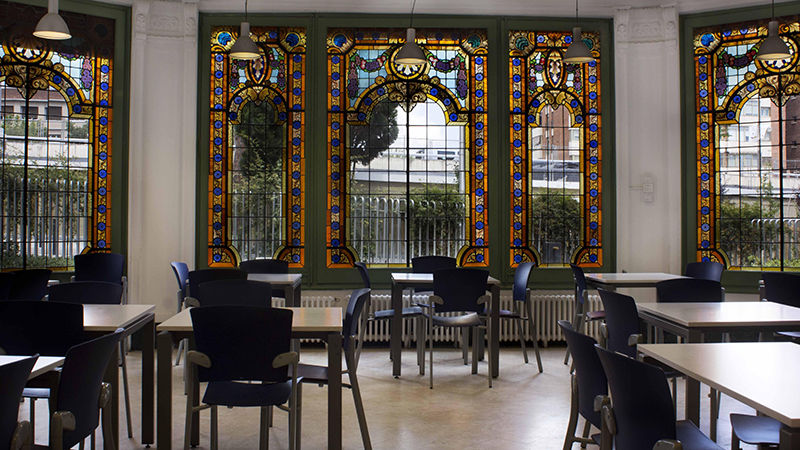 Pastisseria Foix
Walking around your rental apartment in Sarrià would not be the same without stopping to admire the sweet showcase of the Foix pastry shop, an institution in the neighborhood. With more than 125 years of history, this establishment has sweetened the lives of many locals. The writer J. V. Foix, son of the founder of the bakery, exchanged sweets for poems and became one of the greatest literary figures of Catalan letters.

Tomàs Bar
And from the cakes to the potatoes, because in Sarrià, specifically in the Tomàs Bar, on Major Street, those that are considered the best white potatoes in Barcelona are eaten. Do you fancy a tapas route through Sarrià? Check where to enjoy the best bravas around your new rental apartment in Sarrià.

Sinmas Sarrià
This is a project that is generating a network of ecological consumption, producers and companies interested in ecology and changing the current consumption model. Through the points of sale, Sinmas members can access products that come directly from the producers, without intermediaries.

The Cau la Graneria
Five years ago, El Cau arrived in the Sarrià neighborhood and won the trust of the neighborhood. Located in the street of Pedró de la Creu, number 2, this organic food establishment has a very clear philosophy: to recover the figure of the shopkeeper and differentiate small commerce from large commercial areas.

Fee food
Establishment where you can find organic and proximity foods without gluten or dairy. They are served in a paper bag and some can be purchased in bulk.

Artós Winery
Following the line of Free food and environmental care, in Sarrià, we also find the Artós Winery, famous for selling wine in bulk.

Mercat de Sarrià
The Mercat de Sarrià is today a must that we cannot ignore. This modern and spacious enclosure reopened in 2007 after a profound renovation. Even so, it retains the original structure of the centennial market that already supplied the neighborhood throughout the last century and continues to do so today.

Terra Temps
You can find direct products from the garden of their owners. Recently I also add organic beers and genuine Amposta products to your offer.

The renowned chocolate master Oriol Balaguer enters the world of bread, pointing to the recent fashion of author ovens. Rustic, peasant, whole grain, with cereals … but also with pipes or chocolate and orange are some of the proposals offered in its Classic Line store in Sarrià.

Enjoy a walk around your new rental apartment in BeCorp · Barcelona – Sarrià and feel how every corner of the neighborhood whispers to you the history of a town that stays true to its essence.

Settings REJECT Accept
Cookies
By clicking below, you agree to the use of the following non-essential cookies:
Save REJECT Accept